Reverend Stefan Zürcher of Switzerland was elected a United Methodist bishop by delegates to the Central and Southern Europe Central Conference.

Zürich, 55 years old, was elected on November 18 at a special meeting called the central conference in Basel. In the fourth round, he got 41 of 68 votes cast. He has been Superintendent of the District of Northwestern Switzerland since 2015.

Delegates met Nov. 16-20 to elect a bishop to fill the vacancy that will be created when Bishop Patrick Streiff retires Aug. 1, 2023. By then, Streiff will have led the conference for more than 17 year. Delegates also engaged in dialogue sessions on church unity and the future of the conference.

Upon his election, Zürcher told the assembly that he was “joyful of this opportunity”.

“I will do my best to accomplish the task you have given me,” he said in German.

Zürcher was elected by the 68 voting delegates, an equal number of clergy and lay United Methodists, from the 13 countries that make up the central conference. The conference stretches from Algeria in the south to Poland in the north, and from France in the west to Romania in the east.

Bishops Streiff and Zürcher will travel together to annual conference meetings in 2023, and at the end of each meeting, Streiff will turn over the authority of that conference to the new bishop. 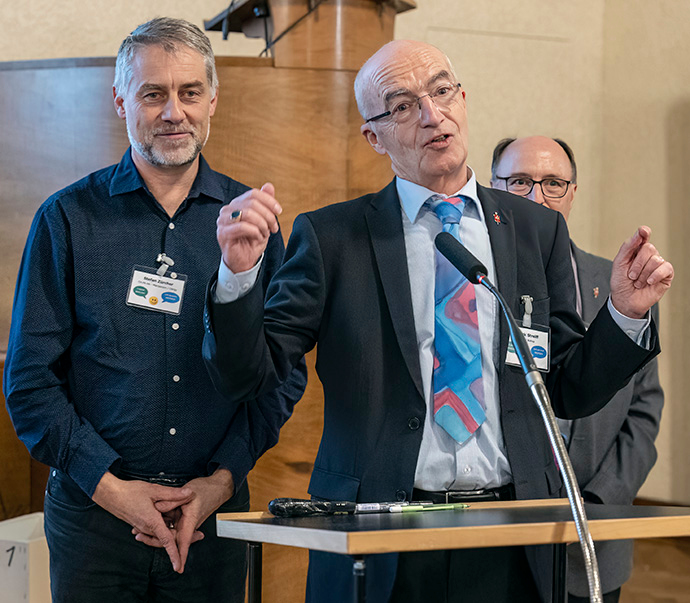 Bishop Patrick Streiff (center) speaks after the election of Reverend Stefan Zürcher (left) as bishop of the Central Conference for Central and Southern Europe of The United Methodist Church. Streiff, who will retire in August 2023, will have led the conference for more than 17 years. At right is Bishop David Bard, who leads the Dakota-Minnesota and Michigan regions of the United States. Photo of Reverend Joerg Niederer.

Zürcher has held leadership positions at all levels of the church. Since 2016, he has been a member of the United Methodist Connectional Table. He is also a speaker for the Methodist eAcademy. At the annual conference level, he participates in the training of lay preachers and has led the crisis team of UMC Switzerland since 2017. His work as a pastor also includes service as an army chaplain.

Ordained in 2003, he held positions in the local church from 2000 to 2015. He studied at Reutlingen School of Theology from 1995 to 2000 and currently sits on the school board. In 2019 he obtained his doctorate from the University of Zurich at the Faculty of Theology.

He and his wife Valerie have four adult children.

In a written biographical sketch, Zürcher said he wanted to strengthen and promote church solidarity.

Do you like what you read and want to see more? Sign up for our free daily and weekly summaries of important news and events in the life of The United Methodist Church.

“I’m not a strategist, but I see myself as someone who helps make things possible and creates a space where people can experiment and where, when the time is right and God gives it, something can grow,” he wrote.

Addressing the conference, Zürcher, who has a background in botany, said he was “always very happy when I see a lot of flowers”.

“What connects us is the common ground, where our roots are, where we draw our common strength, where we feed each other,” he said in German.

“The task for all of us and also for (the bishop) in particular, is to find this land and to take care of it and to ensure that the roots can grow in this land, that it can give birth to fruitfulness . We have to take care of this connection that holds us together, so we depend on the life power of God, on the Holy Spirit who gives life… and gives fruit.

A consecration service will be held on November 20 at Basel Minster Cathedral. The ceremony can be followed live on https://emk-schweiz.ch/livestream/#ZK1 at 2:00 p.m. Central European Standard Time.

Zürcher will serve a six-year term, which ends when the central conference meets after the 2028 General Conference, the denomination’s highest legislature.

The Book of Discipline of The United Methodist Church, the denomination’s law book, directs each bishop to “keep the faith, order, liturgy, doctrine, and discipline of the Church” and to “conduct all persons entrusted to their supervision in worship, in the celebration of the sacraments, and in their mission of witness and service in the world”. Bishops must also be “prophetic voices and courageous leaders in the cause of justice for all.”

Tanton is news director for United Methodist Communications. Contact him at (615) 742-5470 or [email protected]. To read more news from The United Methodist Church, subscribe for free to Daily Digests or Friday Digests.

Do you like what you read ? Support the UM News Ministry! Your support ensures that the latest faith-based news, dynamic stories and informative articles will continue to connect our global community. Make a tax-deductible donation to
ResourceUMC.org/GiveUMCom.