The announcement of the Covid-19 recovery plan (Next Generation UE) in 2020 have a positive impact on citizens’ support for the EU? Barbara Krumphoz, Daniel Devine and Stuart J. Turnbull Dugarte present survey evidence that the €750 billion package adopted by the European Council on July 21, 2020 has had no effect on attitudes towards the EU, no matter how severe the effects of the crisis on the Member States.

As the Covid-19 crisis unfolded in Europe, the EU was criticized for its inaction, with the majority of European citizens unconvinced that the EU had lived up to its responsibilities and many concluding that it was largely without related to the response to the crisis. The European Covid-19 relief plan adopted on July 21, 2020 aimed to convince citizens of the opposite: breaking with the standard of not issuing common debt and the policy of austerity as an essential EU response in times of economic crisis. , the agreement was an exceptional sign of European solidarity.

The announcement of Covid-19 relief funds offers an ideal case study of shaping citizens’ attitudes towards the European Union. Utilitarian theories of EU support argue that individual, rational, cost-benefit calculations determine support for the EU: whether individuals do base their judgment on the (perceived) individual and national benefits of EU membership. EU, then the announcement of the Covid-19 relief plan should have a better attitude towards the EU. After all, the package was a huge sum of money during a critical public health crisis.

EU policymakers are well aware of this supposed relationship and appear to be using intra-European financial redistribution to ‘buy support’. However, it is unclear whether EU financial transfers and structural policies are having the desired effect. Their effect could depend on individual awareness of such financial redistribution, levels of education and a common European identity.

In a new study, we use a quasi-experimental research design to argue that the announcement of Covid-19 relief funds had no significant effect on trust in the EU – contrary to the expectations of utilitarian theories and, presumably, EU policy makers. The unexpected announcement of the relief package happened during the Eurobarometer survey fieldwork in July 2020. Since the announcement happened independently of the fieldwork, it provides us with a natural experience: a control group of respondents before and a treatment group of respondents after.

This strengthens our confidence that the announcement of the relief funds alone is responsible for any change in public attitude towards the EU: there is nothing else that could plausibly separate those interviewed just before and just after the announcement. There is also evidence that people noticed the ad. We observe popular interest in the EU deal over time using Google Trends data (Figure 1) and find a significant and positive discontinuity in interest that coincides with the date of the announcement, suggesting that respondents polled after the announcement had more information than those before.

The results are shown in Figure 2. In summary, the figure shows that Covid-19 relief funds do not appear to have changed levels of trust in the EU. The effects are insignificant even when conditioned by the severity of the economic shock facing Member States as a result of Covid-19. We also tested whether the effects of the announcement depended on key individual characteristics such as education, political interest and attachment to the EU. These results are plotted in Figure 3. 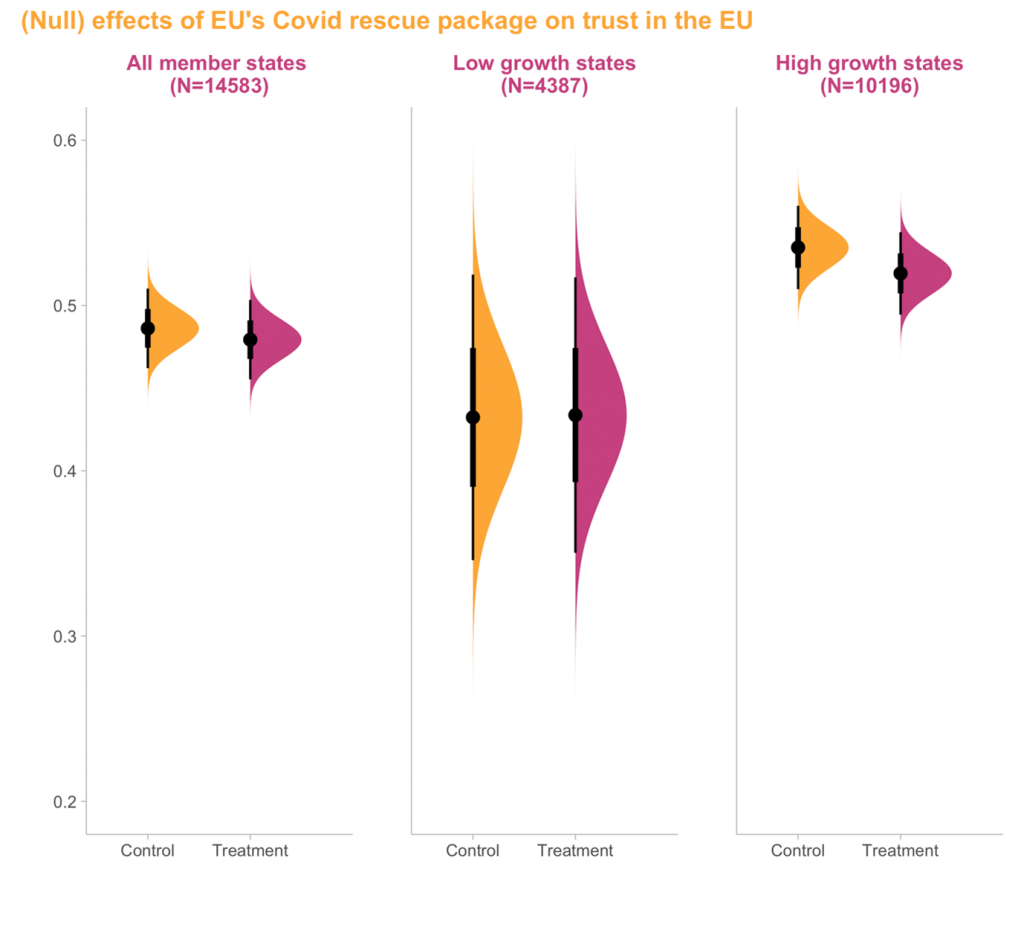 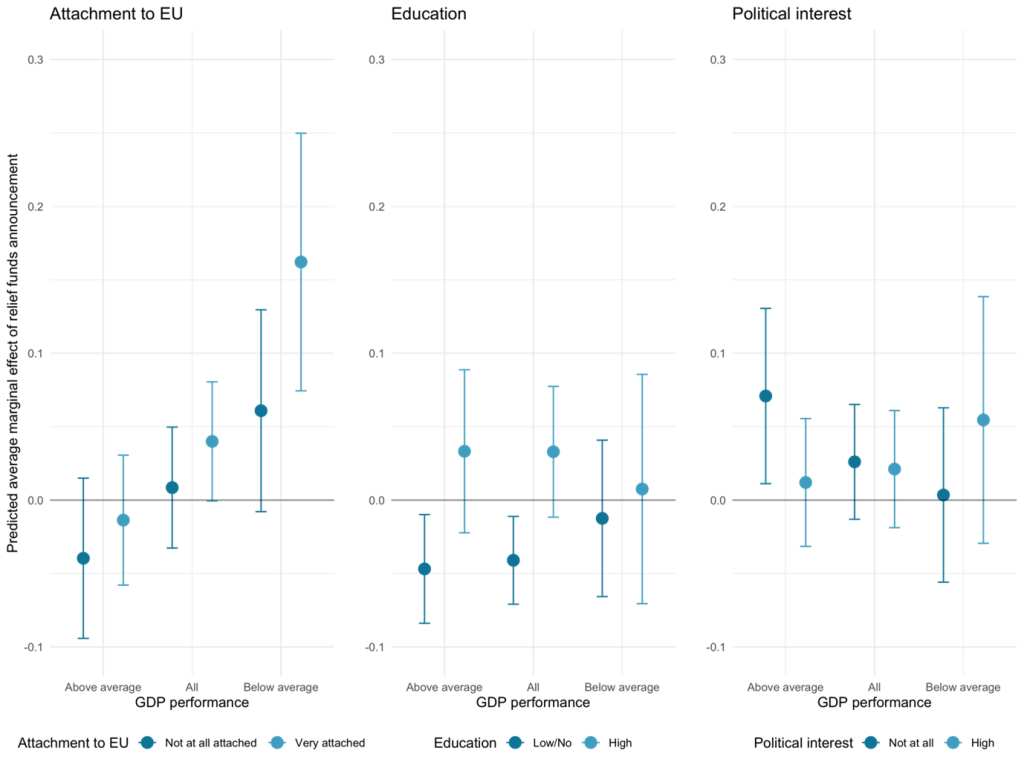 Overall, individual characteristics show moderate interaction effects, with the exception of those who were most attached to the EU in countries with below-average GDP growth, among which the announcement increased trust by 16 percentage points. However, this is not statistically different from those who are not at all attached to the EU in these countries. Similarly, for education, the announcement had a slight negative effect among people with little or no schooling in countries with above-average GDP growth. There were no statistically different results for political interest. Overall, there is little evidence that the announcement has boosted support among people very attached to the EU and in the countries hardest hit by the pandemic.

We have also extended our analysis to other outcomes such as citizens’ satisfaction with EU policies during the pandemic, EU economic expectations, national economic expectations and the EU differential (if people trust the EU more than their national government). As shown in Figure 4, we found no significant effect on satisfaction with the EU policy response, but a positive impact of the announcement on economic expectations at national and European level in the countries with GDP growth below the EU average (the reverse being true in countries with above average GDP growth in the EU). These significant effects on economic expectations demonstrate that the news caused citizens to update their view of the economy in response to the EU bailout, but the news did little to influence trust in the institution that distributes these funds. 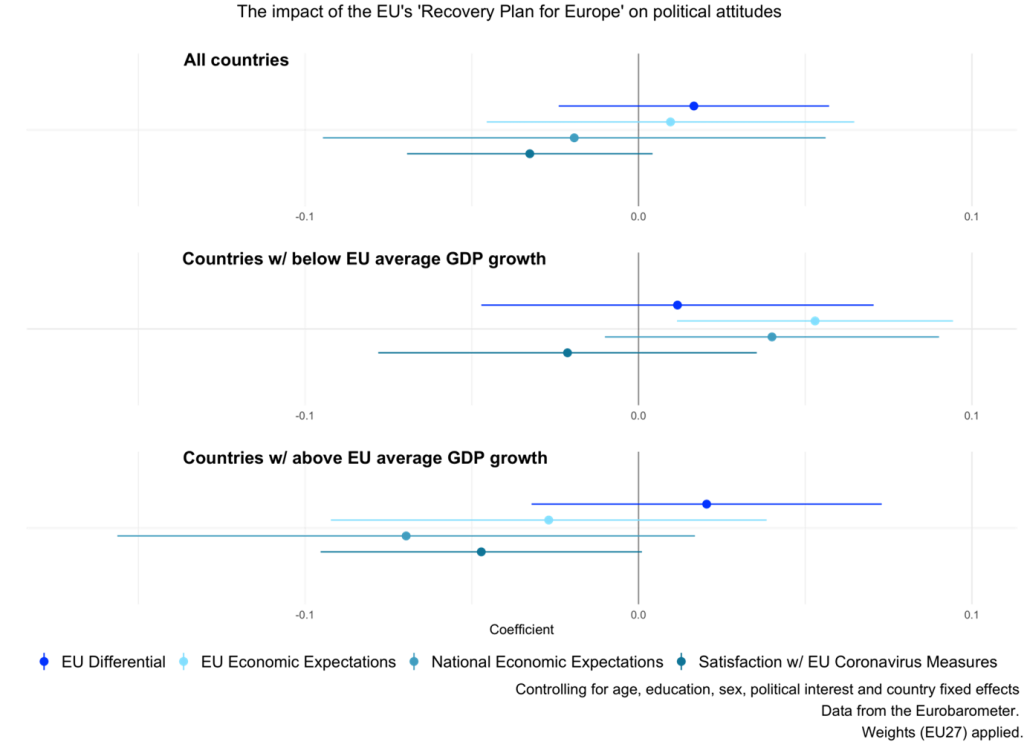 Our results show that the Covid-19 relief fund generally did not have a significant positive impact on citizens’ trust in the EU, except in certain specific circumstances; however, there are also circumstances in which there has been a negative impact. These results contribute to our understanding of support for the EU by providing evidence that one-off, large-scale and ad hoc financial transfers between the EU do not necessarily improve citizens’ trust in the EU. While these results add a missing piece to a larger puzzle, they do not rule out causal mechanisms between EU financial redistribution and public support at work elsewhere. However, they suggest a need for caution among policy makers trying to ‘buy’ EU support from skeptical citizens.

Note: This article gives the point of view of the authors, and not the position of EUROPP – European Politics and Policy or the London School of Economics. Featured Image Credit: European Council