Stefan Radovic still remembers the day when, as a teenager on his way to school, he was accosted by a group of students outside the building shouting “Kill that ‘faggot’!” He remembers fearing for his life.

After the homophobic attack, he had to be escorted by the police to go to high school in the small Serbian town of Kursumlija, where 13,000 people live. “The experience was so traumatic for me that I’m still working on the psychological after-effects,” said Radovic, 13 years after the incident.

Today, Radovic is an activist who fights tirelessly to ensure that one day LGBTQ people in Serbia won’t have to deal with violent homophobia like he did when he was a teenager. .

There is still a lot of work to do. According to a survey by the European Union Agency for Fundamental Rights, more than half of the country’s LGBTQ population feel the need to hide their sexuality. Over 90% of respondents said they felt unsafe holding hands with a same-sex partner in public.

The organization of this year’s EuroPride in Belgrade aimed to take a stand against the homophobic climate in the country. This iconic event has been hosted by a different European country every year since 1992, and Belgrade was to be the first Balkan metropolis to do so. Many activists and politicians from other countries had announced their intention to participate. The symbolic highlight of the event was to be the parade on Saturday through the center of the capital, Belgrade.

But in late August, President Aleksandar Vucic unexpectedly announced that the parade had been cancelled. He said that due to the overlapping crises facing the country, he could not guarantee that the parade could go ahead safely. The decision sparked protests across Europe, but the country’s National Security Council, appointed by Vucic, upheld the decision earlier this week.

Nonetheless, hours before Saturday’s march, Prime Minister Ana Brnabic gave the go-ahead for the event to take place despite the earlier ban, organizers said. A large number of police were deployed in Belgrade to protect the marchers, and tensions remained high.

Dunja Mijatovic, the Council of Europe’s human rights commissioner, said earlier that Serbian authorities should lift the ban. “I find it baffling that Serbian officials have prevented the EuroPride parade from taking place, even though other events and large gatherings are still taking place safely in the streets of Belgrade,” she said.

Despite the official ban, event organizers said Friday they intended to go ahead with the parade. “We will not let intolerance and hatred prevail,” they said in a public statement. 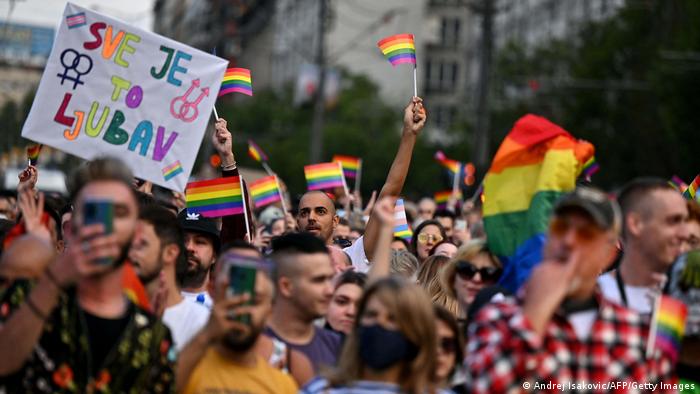 In 2001, the first Serbian Pride Parade was halted after participants were brutally attacked by hooligans. In the next attempt in 2010, there were street battles between police and anti-LGBTQ protesters. A homophobic mob made up of Serbian hooligans, nationalists and fundamentalist Christians threw flash grenades at the security team and set fire to the building that housed the ruling political party and the public television station. Cars were also set on fire and shops looted. In the end, more than 100 people were injured. But since 2014, Pride parades have passed without major incidents.

For years, Aleksandra Gavrilovic of the LGBTQ organization Labris has worked tirelessly for more safety and better treatment for Serbia’s queer community. Gavrilovic and other activists believe the president’s statements on security issues were misleading.

Vucic’s announcement that the pride parade could not take place coincides with news about Serbia’s conflict with Kosovo. Although Kosovo has been an independent nation since 2008, it is still not recognized by Serbia. However, the two countries have recently decided that each nation will accept identification documents from the other.

For nationalist supporters of Vucic, the slightest concession in Kosovo is considered a defeat. “EuroPride provided the perfect pretext to deliberately divert attention from Kosovo so that the far right in the country could have another topic to focus on,” Gavrilovic said.

By canceling the EuroPride parade, Vucic seemed to care little that members of the LGBTQ community would face an increased number of attacks.

Stefan Sparavalo, of the LGBTQ group Da se Zna (“So you know”), said that in August alone there had been as many attacks against members of the LGBTQ community as in the past seven months.

Nationalist and right-wing groups regularly incite hatred against gay people in Serbia, with thousands taking part in an anti-LGBTQ march last weekend. The Serbian Orthodox Church is also making the situation worse for many. After Patriarch Porfirije was appointed as the new head of the church in 2021, he made what many saw as bigoted remarks about the queer community. Last Sunday, he was talking about the importance of so-called “traditional families.”

“This inflammatory speech has ostracized gay people from the rest of society, while simultaneously promoting intolerance and hatred,” Sparavalo said.

The legal situation for LGBTQ people in Serbia has not improved much either, with same-sex couples not being allowed to adopt children and being denied the right to artificial insemination. Activist Aleksandra Gavrilovic knows firsthand how difficult it is to start a family.

She and her partner have three children. Their triplets were born prematurely and had to spend the first few weeks after birth in an intensive care unit. Since Gavrilovic gave birth to the children, she could visit the newborns, but her partner could not. Her spouse also cannot enroll the children in nursery or primary school and cannot take them alone on a trip to another country. “It’s like my partner is invisible. [Even though I have a partner] in this country, it’s like being a single mother with three children,” Gavrilovic said.

Gavrilovic believes that despite Ana Brnabic’s election as Serbia’s first openly lesbian prime minister in 2017, there has been little improvement in the lives of the country’s LGBTQ population. While Brnabic doesn’t deny her sexuality, she hasn’t openly supported the queer community either.

Activists like Stefan Radovic see Vucic’s reappointment of Brnabic as prime minister as a calculated move: it helps the country promote an LGBTQ-friendly image abroad, while underlying inequalities in treatment to gay people by the country will remain unchanged.

Although Radovic suffered homophobic bullying at school, he managed to graduate. But in his hometown of Kursumlija, he still can’t find a job. “I think I can’t find a permanent job because I’m openly gay,” he said. He thinks everyone in his small town knows it too. “They let me know I’m not welcome.”

This article was updated on September 17, 2022, with the news that the parade will take place as planned.