The NATO summit in Madrid ended with a clear statement: Western Europe relies on and increases its dependence vis-à-vis the United States.

“NATO was and is an instrument of “American peace”, a euphemism for American imperialism which has been favorable to Europe”, says Berend CosterDutch professor of Christian history and ethics at the IBSTE International School of Theology and pastor of the Reformed Christian Church of Mataró (Spain).

He recalls that “in 1949, the Americans organized the defense of the part of Europe which they controlled through NATO. He did not subdue the nations of Europe with the help of violence, but rather he was a voluntary submission of Western Europe to the best option to maintain its (relative) autonomy with the best prospects for the restoration of the continent after the Second World War”.

“The entry of the Federal Republic of Germany in 1955 is the best illustration of this thesis, as well as the entry of Eastern European countries since 1990”, adds Coster.

The “exposure” at the recent Madrid summit of NATO political representatives, their companions and an entire entourage of advisers and agents (the paradox of “assured security”) seems to convey much more than a model defense, but a whole idea of ​​what it means to live in a certain part of the planet.

After announcing the deployment of up to 300,000 soldiers on European territory (today there are 40,000), the media showed images of a dinner in one of the halls of the famous Prado Museum of Fine Arts in the Spanish capital. “We cannot exclude an attack on the sovereignty and territorial integrity of the allies” was one of the messages addressed to journalists before a photo session all together and smiling.

“NATO was established as a system of defense against Soviet aggression, mainly dominated by the United States and following American interests in Europesays the Director of the Public Engagement Department and Global Director of the Peace and Reconciliation Network (PRN) of the World Evangelical Alliance, Johannes Reimer.

Professor Coster, who always speaks of the international influence of the United States in terms of “imperialism”, says that “after a time of hesitation because of many mistakes, such as Vietnam, Afghanistan or the Iraq”, he is now “grateful for the presence of the Americans in Europe to lead the defense against The rearmed imperialism of Russia. It turns out that post-communist Russia is as aggressive or more aggressive than communist Russia”.

According to the Dutch theologian, “NATO had been neglected. After 1990 this was no longer relevant, assuming there was no danger of war on its borders. I don’t know if it would have been better to maintain full and expensive armament for 25 years, until the annexation of Crimea”.

Photo of representatives from each NATO member state at the Madrid summit in June 2022. / US Mission to NATO, Wikimedia Commons.

“Now, everyone who warned about russia was right, but we only realized this after the end of February. In any case, deterrence is better than war.

The President of the United States justifies the rearmament of Europe by “the security crisis” that the continent is going through, which he describes as “the greatest since the Second World War”.

Biden pointed out that in Madrid, NATO was undertaking “the the biggest overhaul of our collective defense since the end of the cold war”.

Many recognize the background of Christian values ​​in the formation of many Western democracies and their constitutions, so the question is whether or not NATO fits into these same foundations.

For the Anabaptists, Mennonites and Brethren in Christ of Spain (AMyHCE), “NATO is clearly an apparatus of power and violencewhich contradicts the values ​​established by the Master and aligns with the values ​​of the world”.

“Unfortunately, in the face of any threat to their security, real or not, human beings normally react by arming themselves, prehistorically with sticks and stones and today with very sophisticated weaponry. Based on this principle, we understand that militarization is the logical next step, albeit an unwanted one, as information and media support it, as the arms buying and selling business generates huge profits for manufacturers and intermediaries”, underlines the AMyHCE.

According to this group, “mainstream Christian traditions have always preferred to ignore Jesus’ political program, which was nonviolent resistance to evil in all its forms.”

“We believe that the the life of jesus and his teachings show us his attempt to transmit new values ​​to his disciples, among which “non-violence” and authority based on service and not on power“, underlines AMyHCE.

Regarding American interests in Europe through NATO, Johannes Reimer, a specialist in Eastern Europe, considers that “these interests go beyond Christian values, often of an economic nature and always emphasizing the superpower role of the United States. It is more imperialist than Christian”.

Coster agrees. “Americans have defended, and still defend, their world position, their culture, their economy and their political system as a providential history. As a European, I say that for better or for worse, so far, and at least for Europe, American imperialism has been the most generous in history”.

One of the most obvious consequences of the NATO summit in Madrid is the increased militarization of member states.

Its Secretary General, Jens Stoltenberg, has declared that NATO must position itself “in a more competitive and dangerous world. We agree to a fundamental shift in our deterrence and defense with more forward deployed combat formations.” 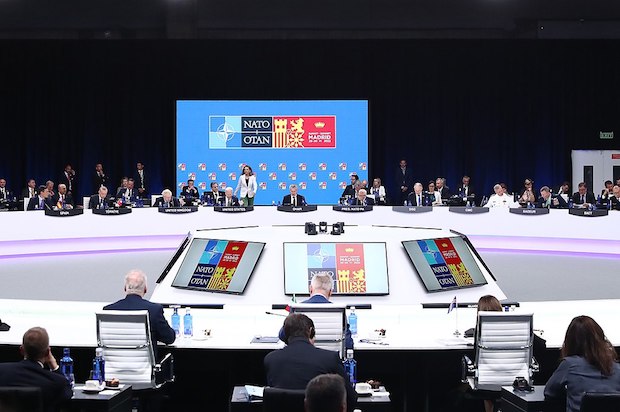 One of the sessions during the Madrid summit. / La Moncloa, Wikimedia Commons.

For Mennonites and Anabaptists, this discourse “is the story that will impress the people and justify Europe’s enormous expenditure on armaments in the years to come. But history tells us that an arms race, far from making us stronger, weakens us and puts us all on the edge of the abyss”.

Johannes Reimer agrees that “the Madrid decisions will erupt militarization in the world and sharpen the conflict with Russia, but even more importantly with China. The West needs less NATO, especially a NATO that is constantly spending itself towards the East”.

This remilitarization, says Coster, is above all “a consequence of Russian aggression”. If he regards the aggression as “disturbing”, he feels the same about the announcement of NATO rearmament.

“Right now it’s the option of the lesser evil to protect us because we know that Russia irresponsibly takes advantage of the weakness of its neighbors. The plan that Putin unveiled is to restore the empire of the tsars and Stalin, which will mean the reconquest and subjugation of several surrounding countries,” explains the IBSTE professor.

He is pointing out that “Western Europe is what keeps Russians from realizing their imperial dream. The current war teaches us what this imperialism is and what it looks like. It is better to control it”.

Another of the main conclusions of the Madrid summit was the enlargement of NATO membership. After Turkey’s initial refusal, Sweden and Finland finally agreed to join the organization official.

“Sweden and Finland were neutral because it was the best defense for Sweden and the best autonomy condition for Finland. The idea was that the the neutrality of both was useful for peace in Europe. Renouncing neutrality was a dangerous challenge that would provoke unforeseen reactions from the Russians. We now know what the Russians’ intentions are: not Ukraine’s neutrality, but Ukraine’s subjection. And not just Ukraine, but maybe the whole West,” Coster says.

For Reimer the entry of Sweden and Finland »sends signals to Russia, but in reality does not change muchsince the two countries had been linked to NATO for years already”.

Posted in: Gospel focus – world
– “NATO is an instrument of ‘American peace’ in Europe”